More than 75 years on, the tragic scenes from the bombing of Hiroshima live on in the memory of survivors. The exact figures of those immediately killed on that dreadful day remain unknown. However, it is thought there were 135,000 casualties when the bomb struck Hiroshima and another 64,000 when Nagasaki was destroyed just three days later.

Flight attendant warns passengers should ‘never, ever, ever’ touch key part of their seat

Flight attendants spend the majority of their working life onboard aircraft, and now one crew member has issued a “disturbing” warning to passengers about using part of their seat.

Find out which part of your plane seat you should “never, ever, ever” touch HERE.

On the morning of August 6, 1945, a lone American plane was seen flying over Hiroshima — recognisable due to the altitude it was flying.

At approximately 8:15am, a 9,700-pound uranian bomb called “Little Boy” was dropped over the leafy city, now home to two million people.

The bomb was created by a team of scientists during World War 2 in New Mexico in what became known as the Manhattan Project.

Survivor Setsuko Thurlo was just one mile away from “ground zero”, the point directly above or below where an exploding nuclear bomb goes off. 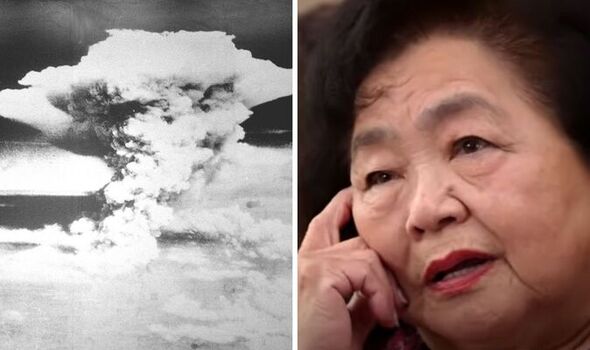 The 90-year-old is now a campaigner and gave the acceptance speech when the International Campaign to Abolish Nuclear weapons — of which she was a leading figure — won the Nobel Peace Prize five years ago.

She was just 13 years old when the bomb hit.

In a 2017 interview with the National Post, Ms Thurlow said: “I saw the blue-ish, white flash all over the window.

“When I regained consciousness in the total darkness and silence, I knew what happened. I tried to move my body, but I couldn’t, so I knew I was faced with death. Finally, the Americans got us.” 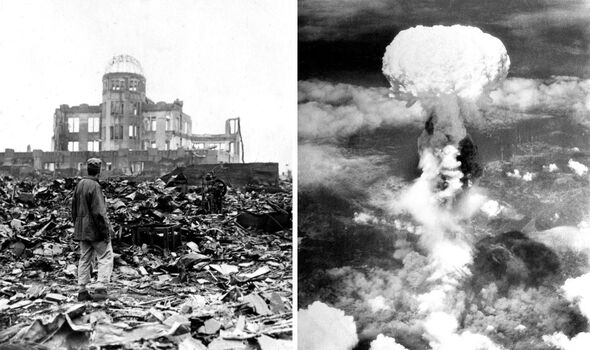 Hiroshima destruction and the mushroom cloud above Nagasaki (Image: GETTY) 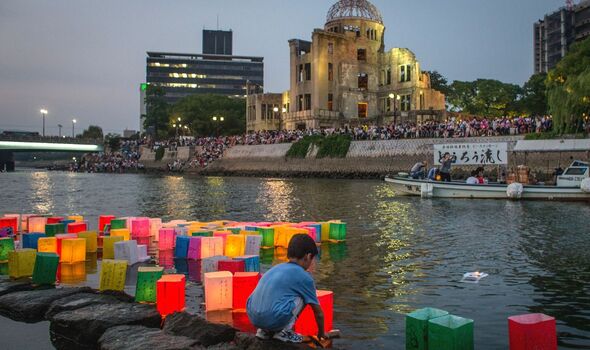 Hiroshima: A boy lights a lantern during the 70 year anniversary in 2015 (Image: GETTY)

Ms Thurlow described being rescued by a “strong” man, who urged her “not to give up”.

Although it was 8:15 in the morning, the sky was enveloped in darkness.

With her eyes glued shut as she recalled the horrific scenes, Ms Thurlow continued: “Everybody was almost naked.

“Their clothes were tattered, hair standing up, and skin and flesh were burned.

“Parts of their bodies were missing and some were carrying their own eyeballs and they collapsed. As they walked, their stomach burst open and their intestines stretched out. 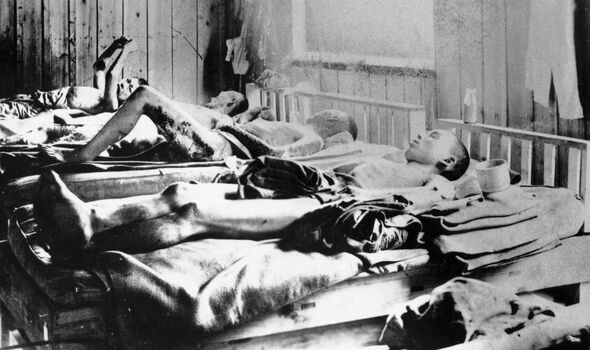 Hiroshima: Survivors of the atom bomb suffered side effects of radiation (Image: GETTY)

She said: “It’s strange you would think people would be screaming, yelling for help, it was so quiet – almost soundless.

“Nobody had that kind of physical and psychological strength to yell… That night we sat on the hill and watched the city burn.”

Tragically, eight of Ms Thurlow’s family members died and she herself suffered from bleeding gums, hair loss, and acute radiation syndrome like many others who survived.

Today, she and other survivors are called “hibakushas”, a Japanese term given to those affected by a bomb or radioactivity coined after the nuclear attacks on Japan in World War 2.

Japan surrendered to the Allies six days after the second bomb, called the code name “Fat Man”, was dropped on Nagasaki and the war was brought to an end.