Putin ‘much weaker than we think’ says John Sweeney

The Russian President has often threatened the EU and NATO nations with nuclear attacks since he invaded Ukraine on February 24. Russian forces have occupied large areas of eastern Ukraine, including Donetsk Oblast and Luhansk Oblast, but their offensive is beginning to stall.

According to Dr Yuri Felshtinsky, author of forthcoming book ‘Blowing up Ukraine: The Return of Russian Terror and the Threat of World War III’, Putin could make use of Belarusian territory to start a full-on nuclear war with the West.

The author told Express.co.uk: “Russia does not have weapons to win the war through conventional methods.

“So what he will do and trust me, that’s what he will do – although this is so terrible that people probably would refuse to believe it and refuse to see this way – he will move nuclear weapons to Belarus if he is allowed to do this.

“And I’m sure that there are ways to prevent him from doing this.

“But if he is allowed to move nuclear weapons to Belarus, they will fire from Belarus and then retaliation will be against Belarus.

“And it’s, by the way, very questionable to me if you could retaliate against Belarus with nuclear weapons, because it’s a small state deep into Europe, and radiation probably will spread beyond the borders of Belarus. 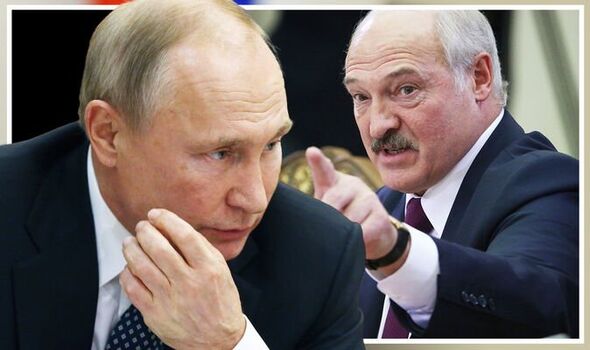 Putin could threaten a nuclear war by moving weapons to Belarus (Image: GETTY)

Ukraine map: How much does Russia control today? Kyiv bracing for large attack 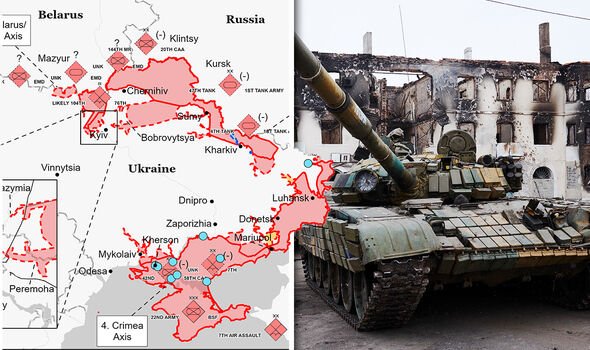 Russian troops are continuing their slow advance through Ukraine, with the capital Kyiv now preparing for a heavy assault.

Express.co.uk explores where Russia has so far established control in Ukraine.

“So you probably would not retaliate against Belarus with nuclear weapons.

“And then Putin will call all the European leaders and tell them, look, so you see what we are capable of doing.

“Do you want to continue this? Do you want us to fire next level of nuclear weapons?”

He continued: “Belarus is already taken by Russia.

“They will fly from Belarus into Ukraine, into Poland.

“This is not happening. We know this, but this doesn’t really matter for propagandistic purposes, for Putin.

“So I would argue that this should be prevented by all means, because then we are facing a real risk of nuclear war and we do not really know how we are going to behave and react if nuclear weapons are used.

“And what Putin is probably doing is trying to force European leaders and American leaders to accept the fact that Russia would go as far as this to secure its demands, Putin’s demands. 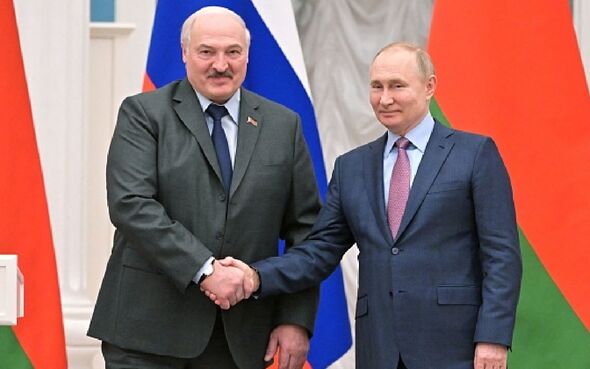 “And so if he came to a decision to use nuclear weapons and he is not there yet, of course, it would be there, in Belarus.

“He is not there yet, I repeat. But if he comes to this decision, then he will then contact the leaders of Europe and demand the surrender, claiming that now he will produce more powerful nuclear weapons against other European states.”

Putin was quick to up the ante on the potential nuclear element to the Ukraine war within days of the invasion beginning in February. Speaking to Russian lawmakers, Putin described the Kremlin’s response as “immediate” to any country which would attempt to “hinder” the invasion.

He added: “And it will lead you to such consequences that you have never encountered in your history.”

He described Russia as “one of the most powerful nuclear states”, with the “advantage in several cutting-edge weapons”.

Putin continued: “In this context, there should be no doubt for anyone that any potential aggressor will face defeat and ominous consequences should it directly attack our country.”

He then placed Moscow’s nuclear arsenal on high alert.

The period since the outbreak of the Ukraine war has been described as the highest point in international tensions since the Cuban Missile Crisis of 1962.

Russia places the blame at the West’s door, saying NATO – a nuclear alliance – “is engaged in a war with Russia through a proxy”.

UN Secretary-General, Antonio Guterres, said the once “unthinkable” idea of nuclear war was “back within the realm of possibility”.

However, the Russian leader appeared to rein in the nuclear talk, saying nuclear war “should never be unleashed”.