Aerial footage released on social media showed the site, which Russian armed forces have been using to prepare for offensives in the eastern regions, devastated by heavy Ukrainian shelling. A missile can be seen striking the centre of the staging area, exploding into a giant fireball and devastating the nearby equipment. The site is later drowned in white smoke from multiple areas.

Despite the successful strike, Russian forces have continued to relentlessly bomb areas in the south and east of Ukraine.

Russia rained missiles down near Ukraine’s Black Sea port of Odessa on Friday, hitting an apartment building and a resort and killing at least 18 people.

Ukrainian firefighters were combing the rubble of a wrecked apartment building looking for survivors, images released by the Ukrainian emergency services showed.

Most of those killed on Friday were asleep in an apartment building in the village of Serhiivka in the Bilhorod-Dnistrovskyi district at about 1 a.m. when a missile struck. Video images showed huge destruction as firefighters battled the blaze and combed the rubble. 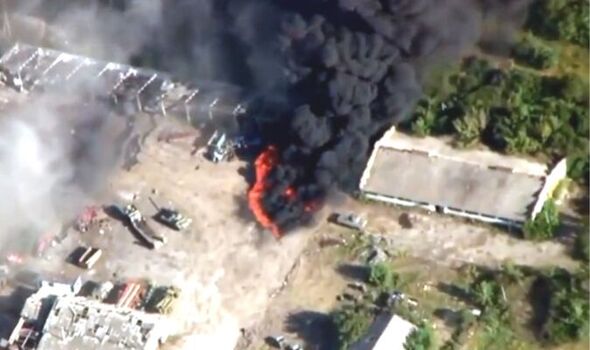 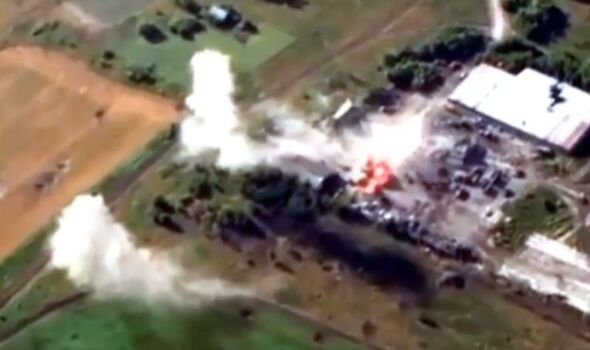 Odessa region emergency official Ihor Budalenko said 41 people had been rescued. Workers were searching for others who might be trapped in the building where 152 lived.

The strike on Odessa, using long-range missiles, comes after days in which Russia has dramatically escalated such attacks deep in Ukraine, far from front lines, including an attack last week that killed at least 19 people in a crowded shopping mall.

Ukrainian President Volodymyr Zelensky and lawmakers in parliament stood for a minute of silence for those killed. 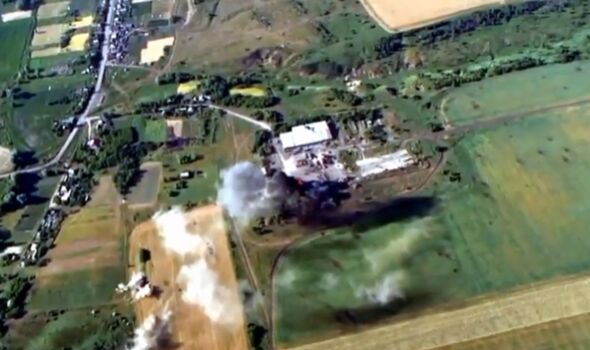 The staging area is engulfed in smoke after the shelling finally ceases (Image: TWITTER ) 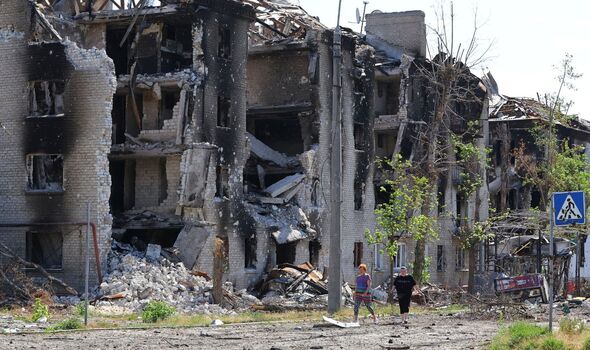 Moscow says it is striking military targets while Kyiv calls the attacks war crimes. A Ukrainian general said on Thursday that Russia may be trying to hit military targets but is killing civilians by firing inaccurate, obsolete missiles into populous areas.

Russia has focused its main ground campaign on the east, where it demands Kyiv cede full control of two provinces to pro-Russian separatist proxies.

Moscow has been on the verge of capturing one of those provinces, Luhansk, since taking the city of Severodonetsk last week after some of the heaviest fightings of the war.

Ukraine’s last bastion in Luhansk is the city of Lysychansk across the Seversky Donets river, which is close to being encircled under relentless Russian artillery assault. 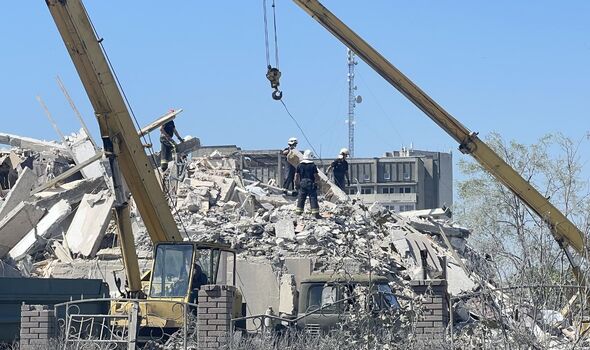 Search and rescue operations are underway in Odessa after 19 Ukrainians were killed by shelling (Image: GETTY )

Mr Zelensky said: “The superiority in firepower of the occupiers is still very much in evidence. They have simply brought in all their reserves to hit us.”

In Russian-occupied Severodonetsk, residents have emerged from basements to sift through the rubble of their city.

Local resident Sergei Oleinik, 65, said: “Almost all the city infrastructure is destroyed. We are living without gas, electricity, and water since May.

“We are glad that this ended, and soon maybe reconstruction will start, and we will be back to more or less normal life.”