Ukraine: Britons discuss their thoughts on the UK’s involvement

The military alliance has played a central role in the Russo-Ukraine conflict, long before the “special military operation” began. Pope Francis this month suggested the invasion was “perhaps somehow provoked”, recalling conversations before the war in which he was warned NATO was “barking at the gates of Russia”.

The group is said to now feel “electrified” and is set to ramp up its militaristic capabilities.

One NATO military officer, quoted in Sky News, said that after the invasion, “overnight the mentality changed”.

He added: “NATO now feels like it is electrified. You can feel the energy surging through the system.”

It is understood a change in direction will be discussed at a summit in Madrid later this month. 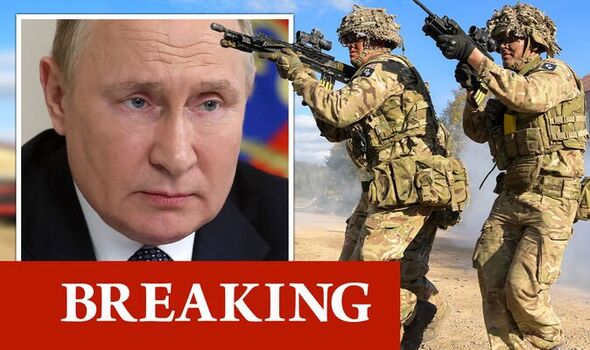 One diplomat predicted “a radical change in posture”.

Reports are yet to be confirmed (or, indeed, denied), though the alliance is believed to be considering both rebranding and expanding its NATO Response Force.

This could become the Allied Reaction Force, and its troop number could increase as much as six-fold, from 40,000 to almost 250,000.

The change would also see Russia labelled the “most significant and direct threat” to security.

READ MORE: Ukraine told to have ‘no illusions’ over EU bid

Some NATO sources have stressed various alternatives are being discussed and the final increase in troop numbers could be smaller.

Alliance Secretary General Jens Stoltenberg said the Madrid summit will be a “transformative summit because we are at a pivotal time for our security”.

Estonia Ministry of Defence civil servant Kusti Salm told journalists that a new arrangement would ensure large numbers of troops were on the ground to ensure Russia “would lose immediately” if it moved beyond Ukraine and into a NATO country.

He said: “You are able to put up adequate, sufficient forces and you indicate to your potential adversary that the force-overmatch is on a level that you [the adversary] would lose immediately.

“This message should translate into a loss of their willingness to invade… Russia can read from it that even if they tried they would be wiped off the earth in the first few hours.”

Boris Johnson also earlier this month expressed his willingness to become further involved in Ukraine’s response to the Russian invasion.

Upon meeting Volodymyr Zelensky in Kyiv for the second time since the beginning of the war, he insisted the UK “will be with you until you ultimately prevail”.

On the same day, Downing Street announced details of an offer to launch a “major training operation for Ukrainian forces” which could train up to 10,000 soldiers every 120 days.

Ukraine is reported to be losing more soldiers than this ever 120 days in the Donbas alone.

Shortly afterwards, the new head of the British Army insisted UK soldiers must prepare to “fight in Europe once again”.

General Sir Patrick Sanders said: “There is now a burning imperative to forge an Army capable of fighting alongside our allies and defeating Russia in battle.

“We are the generation that must prepare the Army to fight in Europe once again.”