Among those evacuated are 400 tourists who have been transferred to nearby Tenerife.


Of those evacuated, 280 people are being housed at the Princess Hotel in Fuencaliente, a municipality in La Palma.


Weather experts have predicted that La Palma airport will not be affected for another three days.


A Saharan wind is expected to blow which will direct the ashes from the volcano westwards.


However, dry air could create bad air quality conditions and tourists are advised to follow all directions from local authorities.

Experts have said the eruption is not expected to cease in the short or medium term.

The volcano on La Palma is emitting around 17,000 tonnes

of sulphur dioxide per day and is now its 26th day of the eruption.


Indicators such as levels of seismicity and deformation suggest that the eruption is not near its end.


Experts also say that if the volcano is ceasing activity it should be emitting around 100 tonnes of sulphur dioxide.

Volunteers are trying to dig out one of hundreds of houses buried by toxic ash.

The video shows the island completely black with ash which has jagged edges that can cause irritation to eyes, noes and lungs.

Hundreds have fled their homes on Thursday as

flows of molten rock pouring from the Cumbre Vieja volcano threatened to engulf another area.

Emergency crews gave people living between the towns of Tazacorte and La Laguna a few hours to collect their belongings and pets and go to a meeting point.

The eruption is now in its fourth week and authorities said they were expecting the lava flow to keep spreading northwest from the volcano. 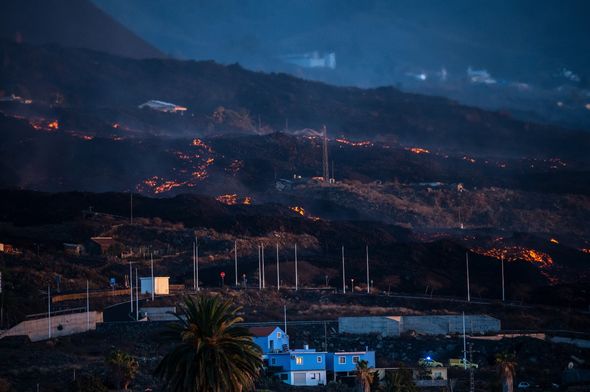 More people were forced to leave their homes overnight as lava threatened to engulf another neighbourhood.

Most residents had already left so only between ten and 15 people were forced to be moved,