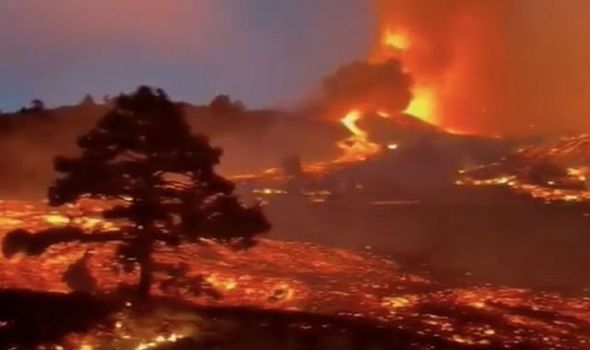 The eruption, which occurred at 3:15pm local time, caused lava to shoot into the air and stream into rivers towards nearby villages.

No injuries have so far been reported.

Pedro Sanchez the Spanish Prime Minister who arrived in La Palma last night for talks with the island’s government on managing the eruption said, ”

We have all the resources and all the troops, citizens can rest easy.”

Experts have warned that La Palma is at risk of undergoing to a large landslide which could cause a tsunami in the Atlantic Ocean.

It is reported that the volcano erupted in an inuhabited area of the mountain and caused a number of forest fires.

Locals and visitors are being warned that the eruption could last up to 2 months.


The eruption caught island officials by surprise as it came after a drop in the level of seismic activity following an earlier decision to raise the alert yellow to level with experts insisting it did not imply an increased risk to the local population.

1000 earthquakes registered on island in 5 days before the eruption

It is reported that the eruption occurred after 1000 earthquakes were recorded on the island in the five days before the eruption.

20 homes have been affected so far

Officials say around 20 homes have been affected so far, with more destruction expected to follow.

Around 500 tourists have been evacuated from their hotels. They have been taken to an old barracks in the capital Santa Cruz de La Palma.

It has been revealed that the lava’s temperature is a staggering 1075 degress Celsius.

Footage of house reached by volcano

Here is footage of a house which has been reached by the volcano.

Mantle of lava running from the volcano

Footage of lava running from the volcano down towards the nearby villages.

Spanish Prime Minister to visit those affected by the eruption

The Spanish Prime Minister, Pedro Sanchez, will today visit the affected area alongside the President of the Canary Islands.

Live footage from the eruption

Watch live footage of the eruption

Some more pictures from the eruption

Here are some more pictures from the eruption, which is still continuing to spread.

Thousands of people have been evacuated from nearby villages. The eruption was the first in 50 years.