U.S. household income fell in 2020 while the national poverty rate rose from a 60-year low as the Covid-19 pandemic upended the U.S. economy and threw millions out of work.

The poverty rate rose one percentage point to 11.4% after having dropped for five straight years and reaching the lowest since 1959 in 2019. 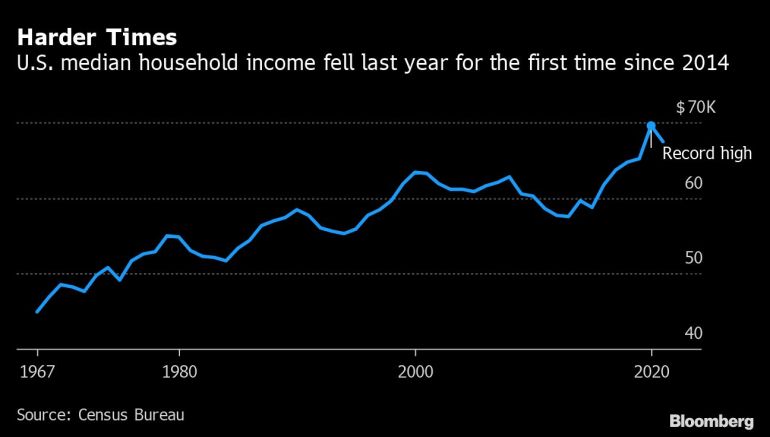 The data help flesh out the picture of American families’ economic health in 2020 amid a pandemic that caused the first annual economic contraction since 2009, put tens of millions out of work and exacerbated existing inequalities.

Lower-wage service-industry workers and people of color bore the brunt of job losses. The government’s stimulus checks and extra $600 a week in jobless benefits helped soften the blow, supporting incomes and spending amid widespread unemployment. 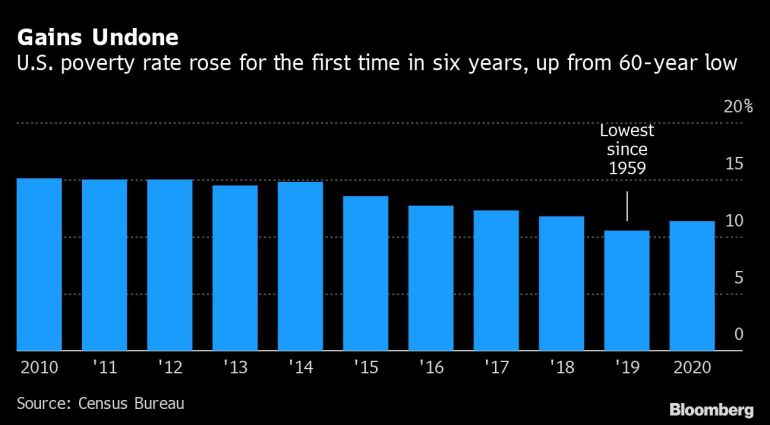 The Supplemental Poverty Measure, which includes many government-assistance programs, declined 2.6 percentage points to 9.1% in 2020, the lowest since the gauge started in 2009. This rate is lower than the official poverty rate because of economic-relief payments related to the pandemic, which moved 11.7 million people out of poverty in the first two rounds of disbursements. Five million people were added to poverty due to medical expenses.

There were 37.2 million people living in poverty in 2020, 3.3 million more than a year earlier, the Census Bureau said. It considers a two-parent, two-child household with less than $26,246 in income to be living in poverty; the measure differs by size of household.

The data show that the official poverty measure is outdated and “can’t be used to examine public policy,” said David Johnson, a research professor at the Institute for Social Research and Ford School of Public Policy at the University of Michigan.