Risk Emergencies (PEVOLCA) in the Cumbre Vieja area (La Palma) due to the increase in seismic activity registered in recent days.

As reported by the

Ministry of Public Administrations, Justice and Security, the decision has been adopted by the Scientific Committee of PEVOLCA convened this Monday to assess the situation.

Specifically, the Alert Plan has been activated for Fuencaliente, Los Llanos de Aridane, El Paso and Mazo, resulting in the change of the traffic light from green to yellow for these municipalities.

Officials say the “highest levels of Helium-3 detected in 30 years” in the volcanic ridge was a detonator.

Cumbre Vieja, Spanish for Old Summit, is an active but dormant volcanic ridge on the volcanic ocean island of La Palma in the Canary Islands that erupted twice in the 20th century – in 1949 and again in 1971. 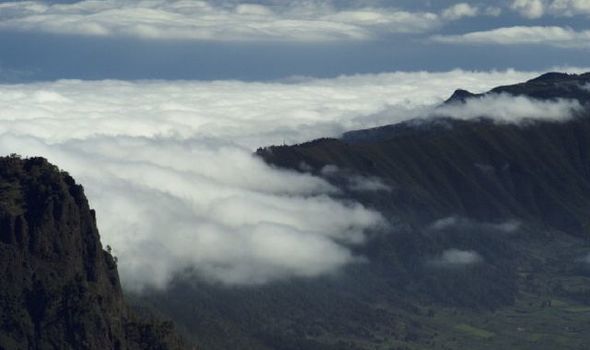 Spain: A yellow warning was issued for the Cumbre Vieja volcano in La Palma

Experts are insisting the chances of an eruption that would put the local population in danger are slim.

Nemesio Perez, Director of the Volcanology Institute of the Canaries (INVOLCAN) said yesterday/on Monday as he assured locals and holidaymakers in the area they could go about their everyday lives: “In 80 percent of cases, these processes remain underground and do not result in a volcanic eruption.”

He added: “We’re moving from a situation of normality to one of alert.

“We’re recognising a change in seismic activity and recommending to the population that they pay attention to information issued by the authorities.”

Mr Perez also explained the three factors that had played a part in the decision to go from green to yellow, saying they included the increased number of tremors and the fact they were occurring nearer the earth’s surface at an average of around seven miles underground instead of 12.

In a social media post, INVOLCAN said: “In the past few years the Cumbre Vieja volcano has seen 10 earthquake swarms, including the one that began on Saturday.

“There is no doubt the current swarm represents a significant change in activity.”

The yellow alert is not said to imply an increased risk to the local population, but involves the “intensification of information and levels of surveillance and more monitoring of volcanic and earthquake activity.”

Seismic activity in the south of the island of La Palma has been “anomalous” since 2017, with eight earthquake swarms recorded since the summer of 2020. 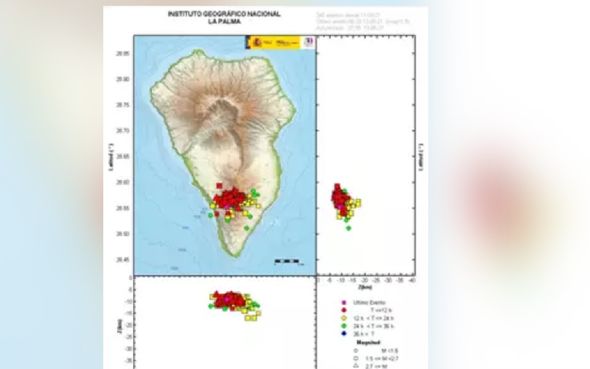 The latest swarm began just after 4am local time on Saturday.

La Palma is one of the westernmost and youngest islands of the Canary archipelago along with El Hierro.

La Palma is said to be at potential risk of undergoing a large landslide which could cause a tsunami in the Atlantic Ocean.

A 2001 research article claimed a change in the eruptive activity of Cumbre Vieja volcano and a fracture on the volcano that formed during the 1949 eruption may be the prelude to a giant collapse.

Authors Steven N Ward and Simon Day estimated such a collapse could cause tsunamis across the entire North Atlantic and severely impact countries as far away as North America.

Later research has debated whether the tsunami would still have a significant size far away from La Palma and whether the collapse is likely to take place in a single failure, with evidence indicating most collapses in the Canary Islands took place as multistage events that are not as effective at creating tsunamis.

The volcano at the centre of the new alert rises around 1.2 miles above sea level and 3.7 miles above the seafloor.

It is described as the fastest-growing volcano in the archipelago and therefore dangerous in terms of collapses and landslides.

It is nicknamed La Isla Bonita, the Pretty Island in Spanish, because of its incredible landscapes, imposing volcanoes, dense forests and unique beaches.

Tourists are drawn to the island by its hiking trails, food, beaches with crystal-clear water, wonderful night skies and pleasant all-year-round temperatures.