The move adds to signs that Chinese authorities are laying the groundwork for what could be one of the country’s biggest debt restructurings.

China’s government is assembling a group of accounting and legal experts to examine the finances of China Evergrande Group, a potential precursor to a restructuring of the world’s most indebted developer.

Regulators in Evergrande’s home province of Guangdong dispatched a team last month from King & Wood Mallesons, a law firm whose specialties include restructuring, two people familiar with the matter said, asking not to be identified discussing private information. At the urging of Beijing, provincial officials are also sending additional financial advisers and accountants to assess the developer, one of the people said.

The move adds to signs that Chinese authorities are laying the groundwork for what could be one of the country’s biggest debt restructurings. While senior leaders in Beijing have yet to indicate whether they would allow Evergrande creditors to suffer major losses, bondholders are pricing in slim odds of a rescue. Guangdong officials have turned down at least one bailout request from billionaire Evergrande founder Hui Ka Yan, who owns a controlling stake, one person familiar with the matter said.

Evergrande said on Tuesday that the company hired its own advisers, Houlihan Lokey and Admiralty Harbour Capital, to “assess the group’s capital structure” and “reach an optimal solution for all stakeholders.” The disclosure came in an exchange filing outlining the dire state of the company’s finances, with Evergrande warning that it faces “tremendous” liquidity strains.

The company’s shares fell 12% in Hong Kong, extending this year’s drop to 80% and closing at the lowest level since November 2014. Evergrande’s 8.25% dollar bond due 2022 dropped about 5.5 cents to 27 cents, pricing in a high likelihood of default, according to Bloomberg-compiled prices.

Pressure is building on Hui and Chinese authorities to find a resolution to a months-long crisis that has intensified markedly in recent days. The developer is falling behind on commitments to suppliers, retail investors and homebuyers, raising the specter of social unrest after a spate of protests at Evergrande offices across China. Protesters gathered at the company’s Shenzhen headquarters for at least the third straight day on Tuesday, braving the rain to demand repayment on overdue wealth-management products.

The extent of the losses facing investors will depend in part on whether Chinese authorities and state-run banks take steps to limit the fallout. Evergrande, which has about $300 billion of liabilities, has emerged as the biggest test yet of President Xi Jinping’s willingness to let overindebted companies fail as he tries to wring the excesses out of China’s $54 trillion financial system.

Without state intervention, the risk is that Evergrande enters a downward spiral. The developer said in its statement on Tuesday that property sales will drop in the normally buoyant month of September because of waning confidence among homebuyers, who often need to give the company large down payments for properties that may take years to complete.

Evergrande said it hasn’t made material progress on plans to sell stakes in its electric-car and property services units, adding that the planned disposal of its Hong Kong headquarters building hasn’t been completed as expected. Asset sales had been one of the most important pillars of Evergrande’s plan to escape its cash crunch.

Guangdong’s government has encouraged Evergrande’s major banks to set up a creditor committee, a move that would allow lenders to take over major decisions including asset disposals, two people familiar with the matter said. The banks are reluctant to do so before getting a clear nod from national regulators, the people said. 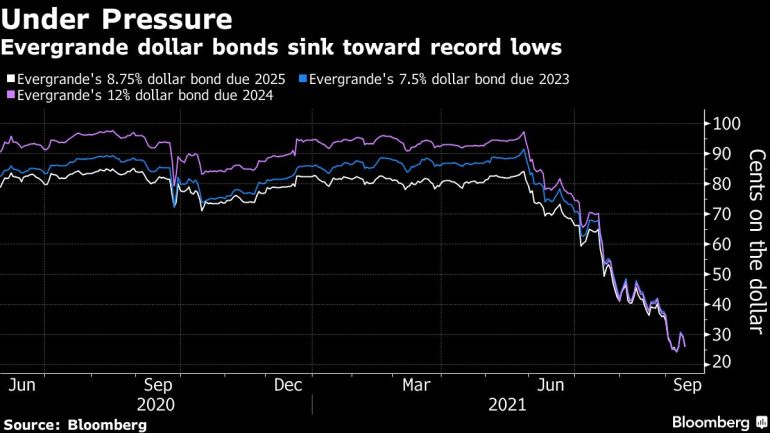 China’s Financial Stability and Development Committee, the nation’s top financial regulator, gave its blessing to an Evergrande plan last month to renegotiate payment deadlines with banks and other creditors on a piecemeal basis, a person familiar with the matter told Bloomberg last week. It’s unclear whether recent developments, such as the investor protests, have caused Beijing to reconsider.

Evergrande, which denied rumors late Monday that it would file for bankruptcy, said on Tuesday that Houlihan Lokey and Admiralty Harbour Capital would “explore all feasible solutions to ease the current liquidity issue.”

Houlihan Lokey has one of the largest financial restructuring operations globally, having advised on some 1,400 cases with more than $3 trillion in debt claims since 1988, according to its website. Its largest case by assets was Lehman Brothers Holdings Inc.

King & Wood, the law firm tapped by Guangdong province, is one of China’s biggest providers of insolvency restructuring services. It has been involved in high-profile cases including HNA Group, Brilliance Auto Group Holdings Co. and China Fortune Land Development Co.

“It looks like they are working on debt restructuring after no concrete results on asset disposals, and the first task is to stabilize the holders of wealth management products which could be a social issue,” said Daniel Fan, a credit analyst at Bloomberg Intelligence. “It seems the developer is working on rescheduling pretty much all onshore debt, and the next step is to do the same for offshore investors.”

While the developer doesn’t have any bonds maturing until 2022, it faces $669 million in coupon payments this year, including $83.5 million due Sept. 23 for a dollar note. Fitch Ratings highlighted an increased chance of default on these interest payments when it slashed Evergrande’s ratings deeper into junk territory last week.

“It will be increasingly difficult for Evergrande to pay out on offshore obligations,” said Howe Chung Wan, head of Asia fixed income at Principal Global Investors. “It seems to us the priority now would be to go for an orderly restructuring and manage claims in an organized fashion.”