MarineLand’s Orca Kiska bashes head against side of tank

The 44-year-old Orca named ‘Kiska’, better known as a ‘Killer Whale’, was caught rutting its enclosure at Canada’s

park in Niagara Falls by an anti-captivity campaigner on September 4. Campaigners say this behaviour is a clear sign of distress and may be due to the

having spent the last 10 years alone after her tank mates and baby calves died.

The tear-jerking footage shows the whale moving its head back and forth as it hammers the side of its shallow tank as water splashes everywhere.

Aerial footage shows the extent of the whale’s desperation as it swims and crashes around the edge of its tiny enclosure as activists can be seen displaying a #FreeKiska banner.

The footage was shared on social media by Phil Demers, a former park employee who now campaigns to end the cruel practice of keeping orcas in captivity for the pleasure of the paying public.

In a tweet, he said: “Anti-captivity activists entered MarineLand and observed Kiska, their last surviving orca bashing her head against the wall. Please watch and share. This cruelty must end #FreeKiska.” 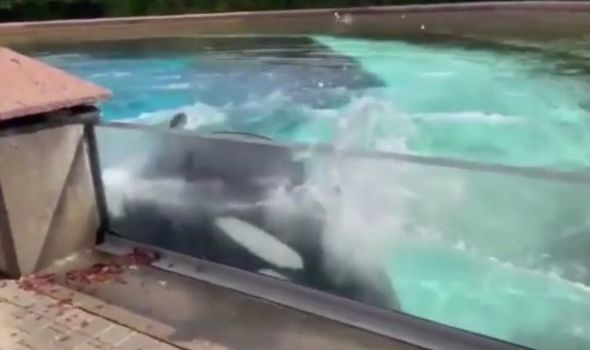 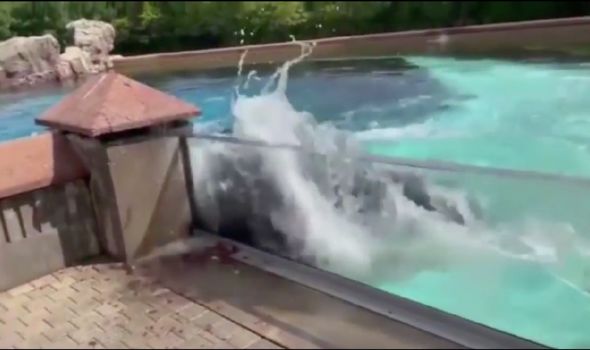 The whale is reportedly “distressed” in its unnatural environment

According to mr Demers, Kiska was born off the coast of Iceland and has been in captivity since 1979.

Following the horrific footage, UK-based Orca Rescues Foundation told The Sun newspaper: “For over 40 years, she has suffered the loss of her freedom, her babies, and all of her tank mates.

“For the past 10, she has been in complete social isolation from others of her kind. This is what her loneliness, and her captivity, has done to her.”

While Rob Lott, who campaigns to end whale captivity across the world told iNews that the head-bashing behaviour Kiska shows in the footage is a “direct, stress-related result” of wild-caught Icelandic orca being raised in captivity. 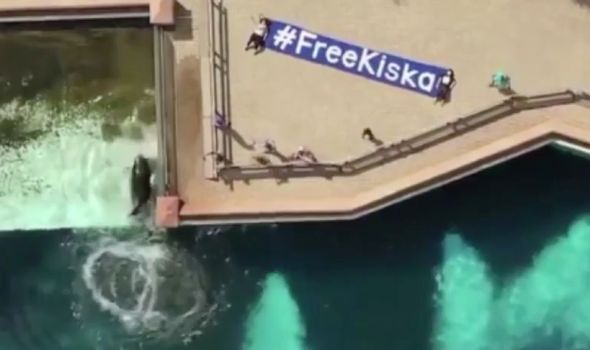 He said: “Sadly, this isn’t unique and the repetitive, self-inflicted behaviour shown by Kiska has been seen in other captive orcas where years of boredom in barren, featureless tanks with little or no stimulation manifests itself this way.”

He went on to stress: “Kiska has been without an orca companion since 2011 and is deprived of every aspect of the social culture she would have experienced in the wild.

“Orcas, and indeed all whales and dolphins, are extremely poor candidates for life in captivity.” 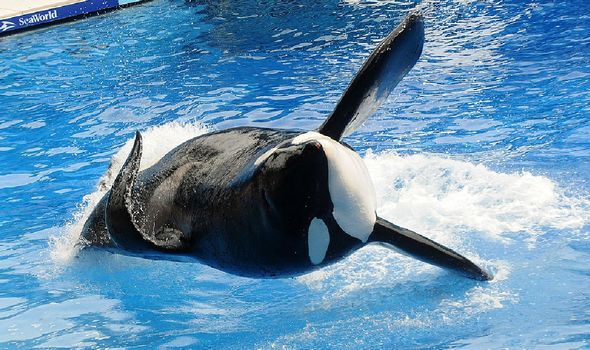 Killer whales are social animals that in the wild live in ‘pods’ comprising of several multi-generational families.

The desperate plight of orcas being held in captivity was brought to the World’s attention by the 2013 documentary Blackfish which examined the life of Tilikum, the World’s largest captive orca that was kept by SeaWorld.

In his life, the enormous 5.7 tonne Killer whale killed three people who performed with it for shows at the Orlando SeaWorld park. Tilikum was captured off the coast of Iceland in 1983 and died in captivity in 2017.

The film triggered a massive public response, including millions of dollars in losses for SeaWorld, forcing the business to end its Orca breeding programme and bring an end to live performances using the magnificent animals.