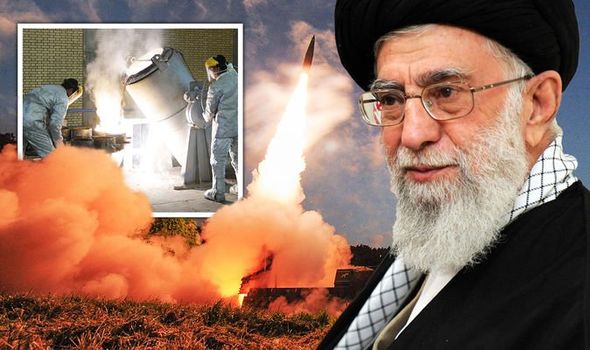 Iran could produce a nuclear device in just a few weeks

The appointment of vice president Mohammad Eslami to head Iran’s Atomic Energy Organisation (AEOI) emerges just days before a damning report is due to confirm that the regime now has enough enriched uranium to build a nuclear weapon in less than two weeks. And it comes as the problematic withdrawal from Afghanistan has caused US allies and foes alike to question the desire of President Joe Biden’s resolve on the world stage.

And between 2004-07, as director of the Defence Training and Research Institute ‑ part of the Ministry of Defence ‑ he oversaw the development of Iran’s first missile re-entry vehicles and the early stages of the uranium enrichment programme in the early stages.

This led to him being placed on a UN Security Council’s sanctions list in 2008.

“Iran is sending a message that it doesn’t care what the West may think,” said Heinonen, now with the Stimson Centre think tank.

“This means Iran has already achieved a kind of immunity.”

He accused France, Germany and the UK ‑ the so-called E3 which are still engaged with the JCPOA Iran nuclear deal ‑ and Biden, who was vice president under Barack Obama when it was brokered, of “living in the past”.

“Sadly Biden and Europe are still living in the past. The Joint Comprehensive Plan of Action was based on hope, not fact. It has failed. Iran has moved on,” he said.

“Biden has the need to preserve a legacy he was part of. But it is the E3 who will feel the pressure of this new development. After all, this has happened on their watch.”

With the US still technically out of the JCPOA, it will be down to the E3 to invoke a so-called ‘snapback’ to reverse the lifting of sanctions agreed under the terms of the deal.

“But this is also an opportunity to find a different approach. Iran has no real interest in nuclear weapons, but it does want to end all sanctions,” he added.

“One way forward would be for the E3 to offer Iran uranium for a peaceful nuclear programme, on condition that it no longer enriches its own. If it complies, it will reap vast economic benefits. If it does not, it will find itself the subject to harder sanctions than before.

“Only a tangible bargain like this can hope to result in real change. It would represent a win-win for diplomacy .”


What is happening where you live? Find out by adding your postcode or


Since Biden came to power, Iran’s regime has also forced through a new hardline government, headed by the so-called “Butcher of Tehran” Ebrahim Raisi ‑ notorious for his role in the execution of 30,000 political prisoners, including women and children belonging to People’s Mojahedin Organisation of Iran.

His cabinet contains four ministers who are subject to UN or US sanctions, including Interior Minster Big Gen Ahmad Vahidi, one of the founders of Iran’s terrorist Quds force and mastermind of the 1994 bombing of a Jewish Community Centre in Argentina, and Roads and Urban Development minister Rostam Ghasemi who, while oil minster under former president Mahmoud Ahmadinejad, plundered hundreds of billions of dollars of Iranian oil revenues in the service of the Revolutionary Guards, for the nuclear, and ballistic missile programs and terrorist projects.

Speaking last night Shahin Gobadi, of the People’s Mojahedin Organization of Iran, said: “Ebrahim Raisi’s cabinet makes it palpably clear that the regime is hell-bent on pursuing a repressive agenda at home; while it uses its missile and nuclear weapons program to continue to destabilise the Middle East, as reflected by Eslami’s appointment.”