In a statement to MPs, the Prime Minister will hail the “courage and ingenuity” to Armed Forces personnel in the airlift operation from Kabul Airport to bring Britons and Afghan allies to the UK.


He will unveil £5million for military charities involved in caring for the mental health of conflict veterans to show his Government will stand by those who have served the country.


“Just as they kept us safe, so we shall do right by our veterans,” he will say.


On the day the Commons returns following the summer parliamentary, the Prime Minister will update MPs on his diplomatic approach to Afghanistan following the Taliban takeover and plans to resettle around 20,000 Afghan refugees in the UK.

In his statement, he will promise to “use every economic, political and diplomatic lever to protect our country from harm and help the Afghan people.”

He will praise the “courage and ingenuity” of everyone involved in the Kabul airlift, the biggest and fastest emergency evacuation in recent history.

Mr Johnson will point out this week marks the 20th anniversary of the 9/11 terrorist attacks on the US that led to the allied invasion of Afghanistan. 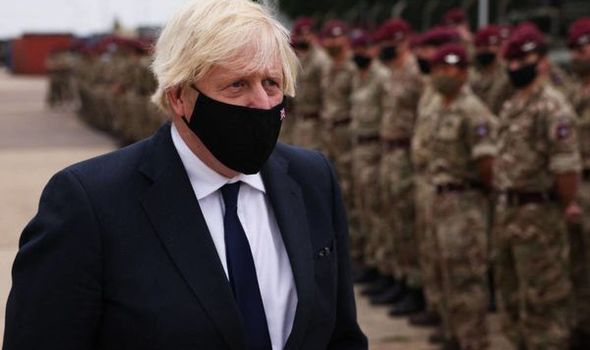 And making his pledge of extra support, the Prime Minister will promise that “no veteran’s request for help will go unanswered”.

Mr Johnson is expected to say: “Thanks to their efforts, no terrorist attack against this country or any of our Western allies has been launched from Afghanistan for twenty years.

“They fulfilled the first duty of the British armed forces – to keep our people safe – and they and their families should take pride in everything they did.”

The £5billion will be made available to charities to increase capacity in mental health support to veterans and serving personnel.


It comes on top of £3million the Government has invested in the NHS Op Courage scheme to provide specialist mental health care for military veterans.

Meanwhile, the head of the Armed Forces yesterday rejected claims there was a failure in military intelligence in Afghanistan about the Taliban’s potential for taking control once Western troops withdrew.


His remarks were at odds with a claim by Foreign Secretary Dominic Raab that military intelligence reports regarded that possibility as “unlikely.”

Speaking on the BBC Andrew Marr Show yesterday, General Sir Nick said: “The first scenario I think also would’ve said is it was entirely possible that the government wouldn’t hold on that much longer.

“Indeed, many of the assessments suggested it wouldn’t last the course of the year and, of course, that’s proven to be correct.”

Sir Nick said “there’s been a lot of talk about a failure of intelligence” but that he said back in July that “there are a number of scenarios that could play out and one of them certainly would be a collapse and state fracture”.


He added: “I think everybody got it wrong.

“It was the pace of it that surprised us and I don’t think we realised quite what the Taliban were up to.

“They weren’t really fighting for the cities they eventually captured, they were negotiating for them, and I think you’ll find a lot of money changed hands as they managed to buy off those who might have fought for them.”

Sir Nick said even the Taliban did not expect to take back power of Afghanistan so swiftly as the US pulled out its troops ahead of the August 31 deadline.


“At the moment they suffer from what we military call catastrophic success. They were not expecting to be in government as quickly as they have appeared and the reality is they are trying to find their feet,” he said.

“We need to wait and see how this happens and recognise that they’re probably going to need a bit of help in order to run a modern state effectively and if they behave perhaps they will get some help.”

Under questioning from MPs this week, Mr Raab suggested the intelligence was wrong on how quickly the Taliban would take Kabul, which fell on August 15.

He told an emergency session of the Foreign Affairs Committee that the “central assessment” from the Joint Intelligence Committee and the military was a “steady deterioration” after troops withdrew in August and “it was unlikely Kabul would fall this year”.


Defence Secretary Ben Wallace countered to say he argued in July that the “game was up” in Afghanistan and suggested “it’s not about failure of intelligence, it’s about the limits of intelligence”.

On Sunday, senior Tory MP Tobias Ellwood called for the public blame game between the ministers to end, saying it had caused the UK “further reputational damage”.

“This unseemly, unprofessional squabbling must stop,” the Commons Defence Committee chair wrote in the Observer.