new vessel was an “impressive achievement”. New images released by Maxar Technologies and published by the Centre for Strategic and International Studies (CSIS) show a massive naval vessel in the Jiangnan Shipyard near Shanghai. The massive new carrier will have catapults for launching tactical airborne early warning aircraft.

“It will be the first Chinese aircraft carrier to use a CATOBAR system and electromagnetic launch catapults.

Catapult-assisted take-off and landing on the ship using arrestor wires.” 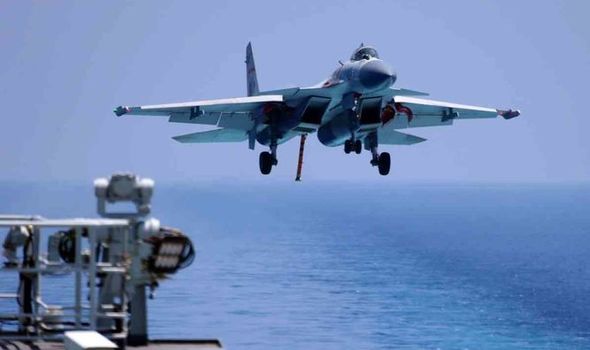 New pictures released of the Chinese Type 003 aircraft carrier
…”It will be the first Chinese aircraft carrier to use a CATOBAR system and electromagnetic launch catapults….[I.e.]catapult-assisted take-off and landing on the ship…using arrestor wires.”https://t.co/r4xSqtUhnp

However, these operational vessels use ramps to launch aircraft. 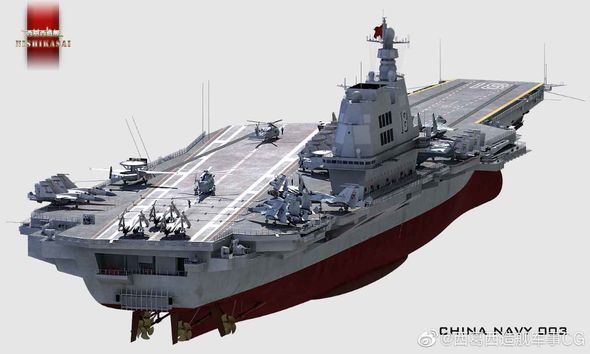 An artist’s impression of the new aircraft carrier

(Image: Artwork by @西葛西造舰军事CG from Weibo)

But this archaic way of launching aircraft from a carrier limits the payloads that can be flown off platforms.

The new satellite images show that China is building an advanced aircraft carrier that has slots for three catapults.

This is opposed to the steam catapults used on vessels from other nations.

The only aircraft carrier with EMALS is the latest US Navy (USN) example, which has been installed on the USS Gerald R Ford.

Speaking to Flight Global, Matthew Funaiole, of the CSIS’s China Power Project said: “While EMALS has had some issues, as do all new technologies, it has clear advantages and is the future direction of CATOBAR systems.

“Electromagnetic catapults require less manpower to operate and maintain, they put less stress on airframes and lower the requirements for freshwater.”

He added: “China is still new to carrier operations, and the Type 003 will be its first modern carrier.

“Once constructed, the Type 003 will be an impressive achievement for the PLAN, but the Chinese navy will still need time to fully train pilots, develop its air wing, and integrate the vessel into its fleet.”