” during his weather report on Canada’s Global News tv station. As Mr Farnell attempted to goad Storm off-screen, the weatherman eventually caved in and gave him treats as the green screen behind the dog made it seem as if he was walking on clouds. The hilarious clip was shared by Global News with viewers praising the “Mutt-erlologist” for helping his owner through the report.

Mr Farnell started the report innocently enough and revealed to Canadian viewers what weather they could expect for the upcoming weekend.

But Storm then nonchalantly entered the set and followed Mr Farnell who powered on despite the distraction.

Storm appeared to be begging for treats with Mr Farnell eventually caving in and chucking a few towards the centre of the set.

But as the green screen changed scenery, the dog looked like it was walking on clouds as it continued to chase Mr Farnell around the set looking for food.

Vine guest rages at young Brits complaining of ‘hard times’ ‘Everybody has suffered!’ 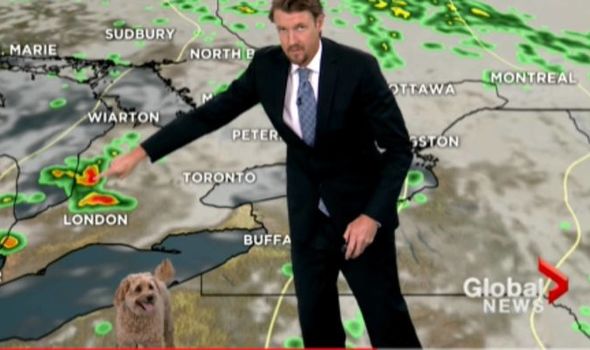 Anthony Farnell was left dealing with Storm during a weather report

Storm was eventually given treats

Mr Farnell was reportedly conducting the report from home hence why Storm was involved.

But it is not the first time the dog has stolen the show as Storm has made regular appearances on Global News during news broadcasts.

In 2012, Storm went viral when he interrupted Global Toronto anchor Leslie Roberts during a serious broadcast.

While discussing a story about organ transplants, Storm popped his head from under the desk which confused many viewers at the time. 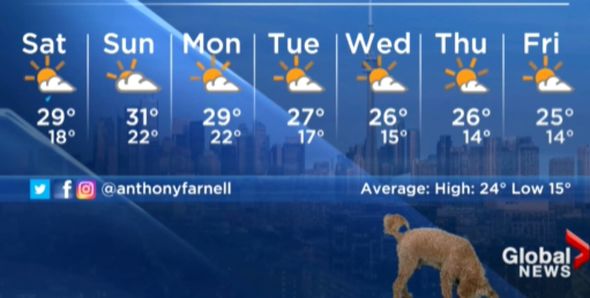 Storm was relentless in following his owner

Mr Roberts powered on with Storm falling asleep behind the desk after his cries for attention were ignored.

The weather clip has been viewed by millions online who could not stop laughing at the bizarre video.

One wrote: “Sorry but this is the best thing I’ve seen all week.”

Another added: “My new favourite WFH problem. I don’t know why, it just gets funnier.” 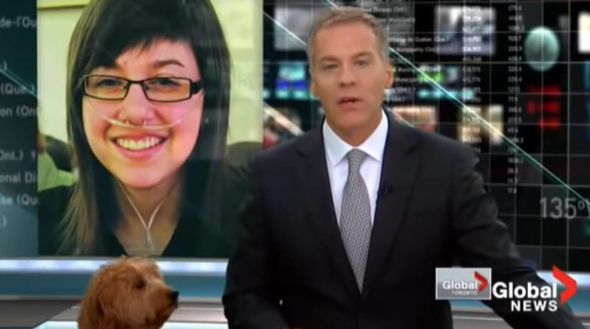 A tweet read: “Me, I’m just proud that Storm the weather dog wants to hang out in Ontario.”

Storm the Weather Dog has a surprisingly big following across the world and has even had articles written in pet magazines about him.

A Facebook fan page has over 5,000 likes with photos of the dog being shared on a regular basis.

Additionally, an Instagram with around 3,000 followers is also set up with a highly engaged community.