in the White House on Friday

for the first time since Mr Bennett was elected to discuss the USA’s involvement in the Iran Nuclear deal. Mr Bennett aimed to dissuade President Biden from returning to the deal that was brokered during the Obama administration and then scrapped by President Donald Trump as Iran continues to enrich uranium further, a flagrant breach of the rules it signed up to. But in a bizarre moment, Joe Biden appears to fall asleep as Mr Bennett is speaking to him.

With his face mask on and hands clasped, a sleepy-looking Mr Biden appears to start nodding off as Mr Bennett is speaking.

Mr Biden can be then be seen to close his eyes and drop his head as Mr Bennett fleshed out the importance of the United States’ relationship with Israel.

Mr Bennett can be heard saying: “Yet another chapter in a beautiful story of the friendship between our two nations: the United States of America and the Jewish democratic state of Israel.

“Both of us who seek to do good and need to be strong.” 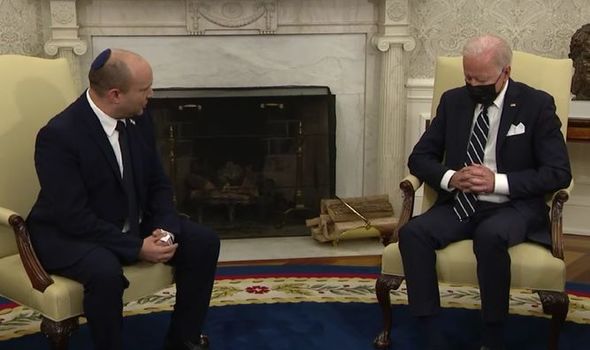 Sleepy, Joe? Biden appears to take a kip while Mr Bennett praises the strength of their relationship 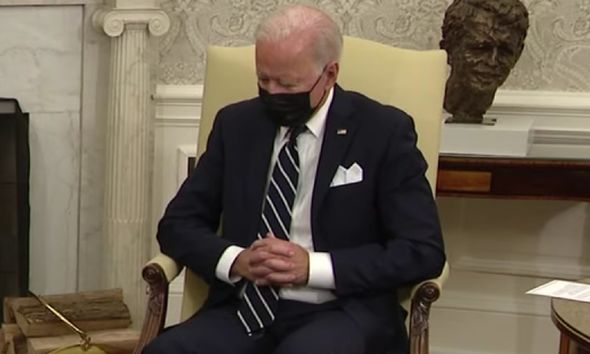 But Mr Biden is silent as he continues to have his eyes shut despite Mr Bennett’s efforts to make eye contact with the President.

The bizarre moment, which lasted for around a minute, has left observers perplexed at what they saw.

LBC radio host Maajid Nawaz shared his astonishment at the video as he questioned what Mr Biden was doing.

He tweeted: “Wait. What? Is Biden literally *asleep* as the Israeli PM is talking to him??” 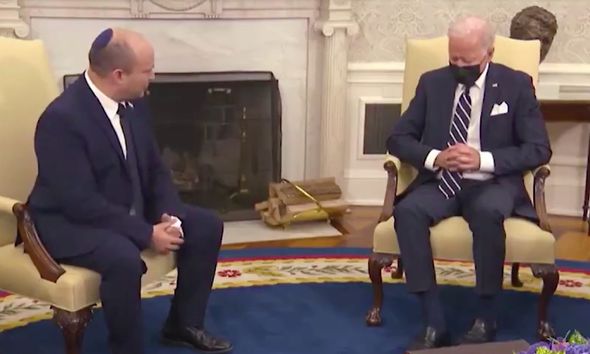 Mr Bennett attempts to make eye contact with the President


While another person amusingly commented: “Yup… He’s been asleep since before the elections.”

It comes as Joe Biden told Mr Bennett on Friday that diplomacy was his “first” option in any decision made on the Iran Nuclear deal but would consider other options if he fails to revive the deal.

President Biden explained: “We are putting diplomacy first and seeing where that takes us.

“But if diplomacy fails, we’re ready to turn to other options.” 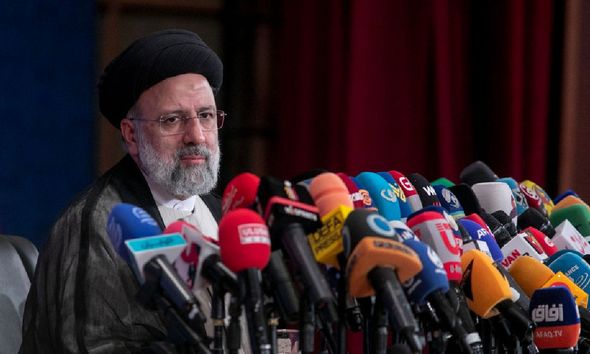 Since the United States withdrawal from the deal in 2018, Iran has slowly scrapped every single limitation the Nuclear Deal imposed on its uranium enrichment programme.

The country now enriches a small amount of uranium up to a massive 63 percent, just short of what is required to make a nuclear weapon.

This comes despite an agreement to stick to enrichment levels of only 3.67 percent under the deal.

Iran insists its nuclear programme is peaceful despite the worrying advances in its production efforts, which include new faster, and more advanced centrifuges and far more of them than were allowed under the 2015 deal.