Chaos erupted in Bolton, Ontario as angry protesters ambushed the Liberal Party rally on Friday and screamed “F*** Trudeau!” over and over again forcing the Canadian premier and his entourage to flee the scene amid major security concerns. It comes as recent months have seen resentment for the Canadian PM soar as anger has risen over

pandemic. The Canadian PM called a snap election on August 15 but opposition parties have slammed the decision sees a five-week-long campaign

In footage circulating online protesters can be seen waving banners as they are held back from getting any closer to the PM’s campaign bus.

The angry crowd can be heard screaming obscenities before the PM had the chance to speak as the situation becomes more and more concerning.

But the rising tension and concerns over the PM and his entourage’s safety forced the PM to cancel the rally amid the chaotic scenes.

Police escort the PM and his team away from the scene following a massive two-hour delay. 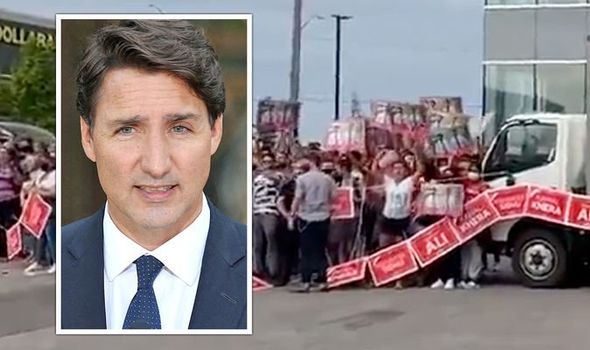 Chaotic scenes forced the PM to cancel the rally 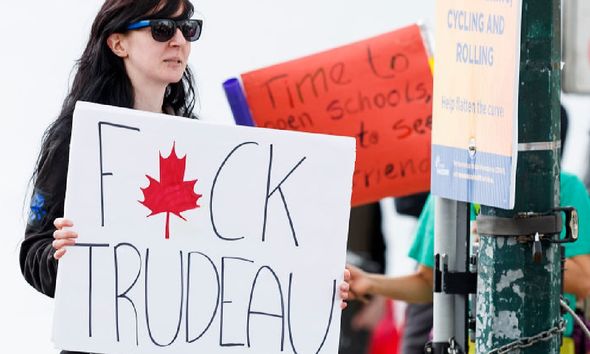 Some Canadian’s are furious at their PM

Mr Trudeau’s canvassing and rallies have been plagued by anti-vax and lockdown sceptic protests.

On Friday, the Canadian PM’s visit to a bakery was also called off as protesters hurled abuse at the PM branding him for “treason” as they chanted “Trudeau treason” during Mr Trudeau’s campaigning efforts.

Mr Trudeau’s campaign has also been marred with criticism over the slow evacuation of Canadians and refugees from Afghanistan following the takeover by the Taliban.


Justin Trudeau: Vaccines are not enough to keep us safe 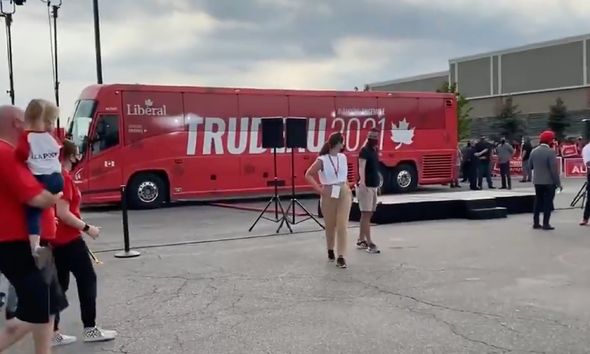 
Despite the criticism, Mr Trudeau has promised to resettle 20,000 Afghans in Canada in the coming “months and years” after the country airlifted a total of 3,700 Canadian nationals and Afghan helpers to safety over the past month.

Most recent polls show Mr Trudeau and Conservative party leader Erin O’Toole neck and neck for the top role, with the Liberal Party leader losing a considerable amount of support in recent days.

The PM currently presides over a minority Government, following poor election results in 2019. 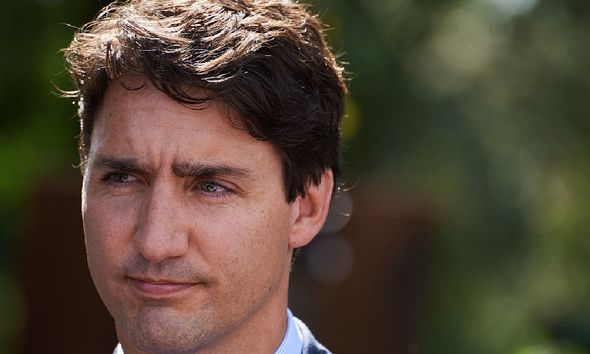 
Mr Trudeau’s popularity plummeted following the emergence of photos of the Canadian leader dressed in blackface, while recent years have seen anger rise over his government’s handling of the COVID-19 pandemic.

Mr Trudeau called the snap election on August 15 when polls indicated his minority Liberal government looked within reach of forming a majority.

Canadians will vote on September 20 two years ahead of schedule.

Mr Trudeau was handed a minority at Canada’s last election in October 2019, since then he has had to rely on opposition parties to help him pass his agenda.

Opposition parties have slammed the Liberals for calling a five-week campaign during the Covid-19 pandemic’s latest wave simply for “political gain”.