has only been in office since January 2021, however his presidency is already fraught with controversy. Currently, Mr Biden is dealing with a crisis in

, brought on by the removal of US troops and subsequent takeover by the

The withdrawal of US troops has been met with anger and dismay around the world, with the Taliban swiftly taking over the country.

This triggered evacuations of international citizens and those most at risk, with countries vowing to take in migrants in a dedicated rescue operation.

However, a devastating attack, which ISIS has since claimed responsibility for, killed at least 182 people – 13 of which were members of the US Military.

Addressing Americans after the suicide bombing, Mr Biden issued a deadly warning for terrorists saying: “We will not forgive. We will not forget. We will hunt you down and make you pay.” 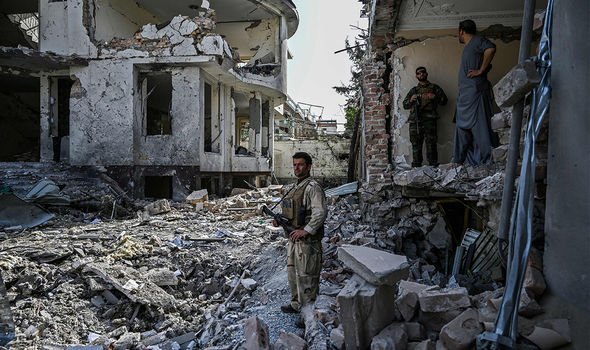 Despite the President’s fighting words, many Americans are swiftly losing confidence in the country’s leader – with recent polls showing a damning downturn.

According to polling aggregate fivethirtyeight.com, Mr Biden’s approval rating has plummeted by 5.5 points in the past month alone.

In July, the President’s approval rating sat at 53.7 percent, however, on August 27 this had dropped to 47.2 percent.

And fivethirtyeight wrote of the drop: “In an era of deep political polarisation where we rarely see big shifts in public opinion of presidents, this counts as a pretty big swing.” 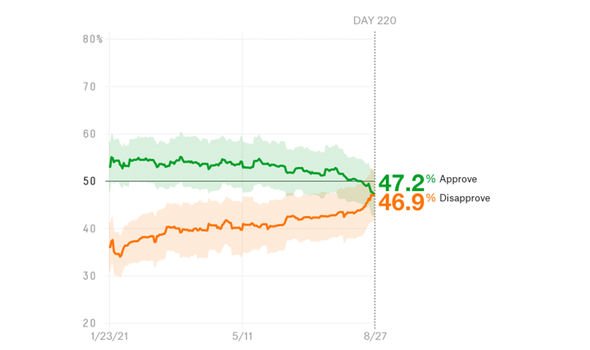 Mr Biden’s approval rating has plummeted by 5.5 points in the past month

However, it’s not just Afghanistan which has concerned Americans, with the country’s response to the coronavirus pandemic and subsequent economic slide also to blame for Mr Biden’s decline in approval.

A survey carried out earlier in August by Gallup found just 23 percent of Americans were satisfied with how things in the United States were going, compared to 36 percent in May.

The survey also found Americans believed the COVID-19 pandemic was the country’s most important issue.

Fivethirtyeight’s presidential tracker shows only 53 percent of Americans approve of Mr Biden’s handling of the pandemic. 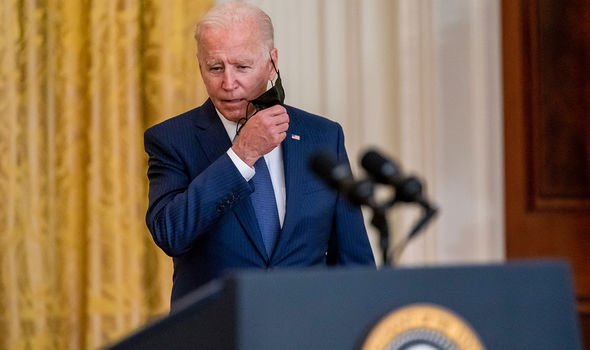 Joe Biden’s presidency has already been fraught with controversy

And coronavirus cases are creeping back up in the USA, with 155,894 new infections reported on average each day.

These figures are 62 percent of the peak — the highest daily average reported on January 8.

With the withdrawal of US troops from Afghanistan reaching its final stages, and stark warnings that more terrorist attacks are likely – how President Biden responds will be the defining moment in his presidency.

In a briefing on Friday, White House press secretary, Jen Psaki, gave a stark warning on future attacks and the remaining US troops in Afghanistan.

She said: “The threat is ongoing and it is active. Our troops are still in danger … This is the most dangerous part of the mission.”

Speaking from the White House on Thursday Mr Biden said: “I’ve repeatedly said this mission was extraordinarily dangerous, and that’s why I’ve been so determined to limit the duration of this mission.

“We will not be deterred by terrorists. We will not let them stop our mission. We will continue the evacuation.”

He added: “America will not be intimidated.”