Afghanistan: Plane takes off after explosion at Kabul Aiport

Kabul airport suffered a potential terror attack today, according from authorities in Afghanistan. Two explosions rocked locations outside of the airport – which allied forces have used to evacuate local and international residents – this afternoon. Taliban officials reported up to 13 people had died in the blast, children among them. 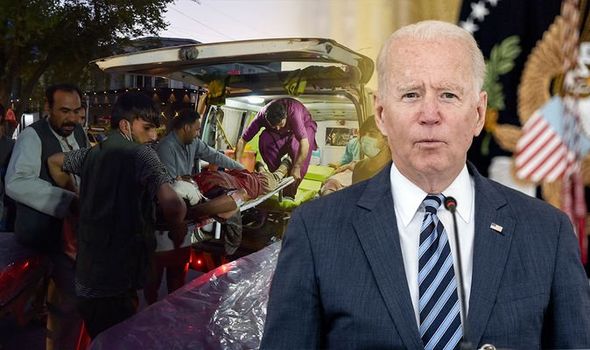 Kabul airport bombing: Who carried out attack? Was it ISIS-K?

Who carried out the attack at Kabul airport?

Neither the perpetrator nor officials on the ground have confirmed who might be responsible for the bombings yet.

But early information has indicated Afghan-based terrorist cell ISIS-K may have carried out the attacks.

Speaking to Deborah Haines, Sky News foreign affairs correspondent, the suggestion may not come as a surprise.

She said: “A British Defence source said to me it was highly likely ISIS-K was responsible for these attacks.

“We haven’t had any claim of responsibility yet.

“And this is not going to be any surprise to anyone given ISIS-K was the group we kept hearing about from everyone, including the US President, were talking about the potential for a terror attack against the airport.”

US officials revealed one attack, close to the airfield’s Abbey Gate entrance, was a suicide bombing, while details remain unclear about the other, which took place near the Baron hotel.

Boris Johnson will seek to clarify the situation via a Cabinet Office Briefing Rooms meeting.

A statement from Number 10 read: “The Prime Minister has been updated on the situation at the airport in Kabul and will chair a COBR later this afternoon.”