But the decision from US President Joe Biden to begin withdrawing troops from the crisis-hit country has sparked a furious reaction.

Another said: “And our NATO allies are telling us not to. Why are we doing this?”

A third person added: “Running not withdrawing – and leaving citizens and allies behind.

“The military should take this effort over.”

Boris Johnson and other G7 leaders had earlier failed to persuade the US President to keep US troops in Afghanistan in order to continue the evacuation efforts past the end of the month.

The Prime Minister had been widely expected to press Mr Biden to change his mind, as they are providing security at Kabul airport to allow people to flee the country. 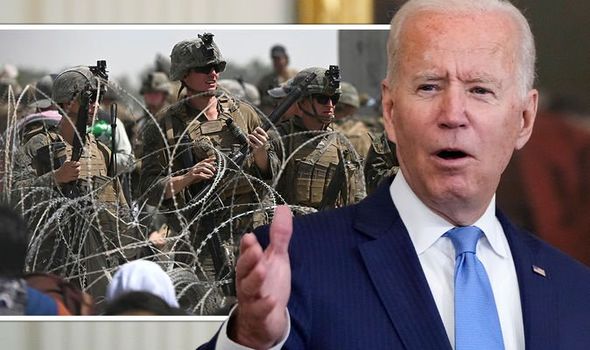 But following an emergency summit of G7 leaders to discuss the crisis in Afghanistan, which was chaired by Mr Johnson, the US President insisted the deadline remained in place.

“We’re confident we can get thousands more out, but the situation at the airport is not getting any better.”

Mr Johnson added G7 leaders had agreed their top condition for the Taliban was granting safe passage for Afghans trying to leave the country before the end of this month.

The Prime Minister said: “The number one condition we’re setting as G7 is that they’ve got to guarantee right the way through, through August 31 and beyond safe passage for those who want to come out.

“Some of them will say that they don’t accept that, some of them I hope will see the sense of that, because the G7 has very considerable leverage, economic, diplomatic and political.”

Earlier on Tuesday, Taliban spokesman Zabihullah Mujahid insisted no evacuations will be allowed after the August 31 deadline.

He told a press conference in the capital of Kabul: “August 31 is the time given and after that it’s something that is against the agreement.

“All people should be removed prior to that date.

“After that we do not allow them, it will not be allowed in our country, we will take a different stance.”