Charlie Herbert, former Army Major General, has praised the “Herculean effort” of the armed forces but says he is “very disappointed” with the lack of organisation from the Ministry of Defence.

Many interpreters who assisted Western forces in Afghanistan during the 20 year conflict have been waiting to be relocated for a number of years.

The evacuation process, which involves more than 1,000 British troops on the ground, is being conducted from Kabul airport.

Mr Herbert has criticised the Government for allowing “all communications with interpreters [in Afghanistan to be] run by a network of volunteers”.

“The only hope is provided by volunteers,” he added.

He claims many interpreters have had “no communication whatsoever” from the British Government.

The volunteers have gathered lists of hundreds of Western allies who need to be relocated and have been sidelined by the Government.

“This is what it looks like at the moment, our interpreters seem to be being left behind,” the former Army Major General added.

Afghan refugees who are evacuated to the UK will be offered a COVID-19 vaccination on arrival, according to Health Secretary Sajid Javid.

Afghanistan is red on the foreign country traffic light system, which means everyone who arrives from the Taliban occupied country will have to quarantine for 10 days.

Vaccination hubs are being set up inside the quarantine hotels so that once they have completed their quarantine they can be offered and delivered a vaccine as efficiently as possible.

The only people who are supporting the decision to withdraw troops from Afghanistan are those who are “hostile to Western interests”, according to Tony Blair.

The former Prime Minister said he had sympathy for President Biden for inheriting this issue but insisted there was a long way to go.

He told GB News: “People want the engagement to end, but we’ve got to realise we were in a situation where our engagement was dramatically different from where it was 10 years ago, nevermind 20 years ago, and where we could have managed the situation.

“The problem with what has happened now is that it is not just about the Afghan people and our obligation to them, it is about us and our security.

“You’ve now got this group back in charge of Afghanistan and they will give protection to Al-Qaeda – you’ve got ISIS already in the country trying to operate at the same time.

“You look around the world, and the only people cheering this decision are the people hostile to Western interests.”

Evacuation efforts are being supported by more than 1,000 British troops on the ground in Afghanistan. 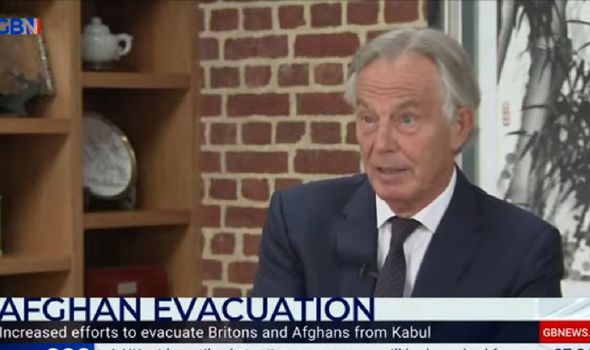 Boris Johnson will ask Joe Biden to extend the evacuation of US troops from Afghanistan.

Minister for the armed forces, James Heappey and foreign office minister,  James Cleverly, said Britain would push for the deadline to be extended past August 31 to increase the number of people who could be evacuated.

Mr Heappey told Sky News around 4,000 people who were eligible to come to the United Kingdom were still stuck in Afghanistan.

The government wants to evacuate thousands more eligible if possible.

: “The thing that I think we’ve all learnt over the last week or so is that the timelines around which we plan are not always completely in our own control.

“Now obviously the more time that we’ve got, the more people we can evacuate and that’s what we’re pushing for.”

The Taliban seemed to be cooperating but Britain could not rely on that support lasting indefinitely, he said.

“So we are prioritising getting as many people out as quickly as possible. If we can buy more time that is great but I think that we shouldn’t be relying on the fact that we will get more time to do this,” Cleverly said.

Johnson will host a virtual meeting of leaders from the G7 group of advanced economies on Tuesday.

The British government is also seeking new sanctions against the Taliban.

The Taliban has warned there will be “consequences” if US President Joe Biden delays the withdrawal of troops from Afghanistan.

The US military is in a race against the clock to evacuate people before the Taliban retaliate.

“President Biden announced that on August 31 they would withdraw all their military forces.

“So if they extend it that means they are extending occupation while there is no need for that.

“If the US or UK were to seek additional time to continue evacuations – the answer is no.

“Or there would be consequences.”

UK to threaten Taliban with sanctions

The U.K. is set to urge other G7 countries to consider sanctions against the Taliban if they commit human rights abuses or allow Afghanistan to once again become a haven for terrorists, according to Reuters reporters.

Asked last night whether he would consider sanctions, US President Joe Biden replied: “Yes. It depends on their conduct.”