Oil capped the week with the longest losing streak since 2019 as the dollar strengthened after the Federal Reserve signaled it will start tapering stimulus and the virus resurgence raises doubts about demand growth.

West Texas Intermediate futures ended the session 2.2% lower, tumbling for a seventh day and extending the week’s decline to 8.9%. Other raw materials including copper and iron ore fell on Thursday following the Fed’s signal. The Bloomberg Dollar Spot Index has risen every day this week, making commodities priced in the currency less appealing. The pandemic remains a threat to energy demand, especially across Asia, with key importer China restricting mobility to combat an outbreak. 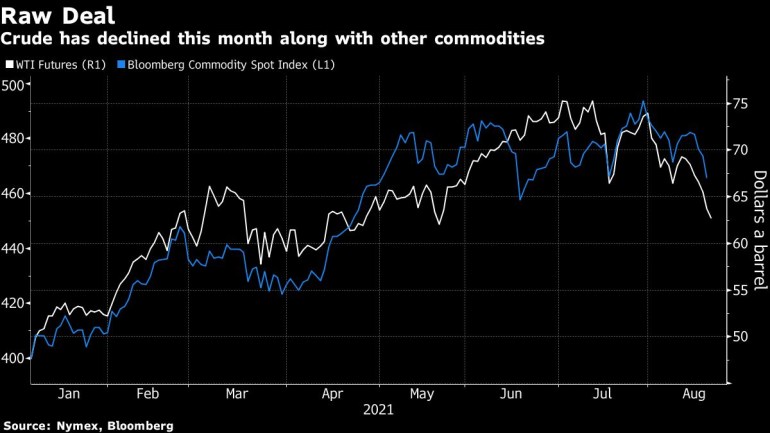 “It’s an exceptionally rare event for oil to fall for such an extended period,” said Thomas Finlon, chief operating officer at Brownsville LLC, a trading and logistics firm in Houston. “External factors including the ongoing effects of the delta variants’ growth and the behavior coming out of the federal reserve, is proving surprisingly significant to investors.”

Crude’s weakness comes amid fading expectations for further large inventory draws in the coming months. Bank of America said prices will probably be range-bound in the second half of the year with more steep drops in stockpiles unlikely. The price plunge may force the Organization of Petroleum Exporting Countries and its allies to pause their next planned production increase, according to Citigroup Inc.

“We have now priced down to a level reflecting more sideways inventories, with demand pain from Covid-19 together with more from OPEC+ on supply,” said Bjarne Schieldrop, chief commodities analyst at SEB AB. “But OPEC+ should be in fairly good control of the market still.”

The pandemic continues to disrupt plans to restart economic activity, crimping mobility and demand for fuels. In Australia, Sydney’s two-month long lockdown will be extended until at least the end of September. In the U.S., more companies announced plans to keep workers at home as the virus spreads. Brent crude is also sinking. The international benchmark is headed for its longest run of losses in more than three years and close to falling below $65 a barrel for the first time since May.

Despite lower headline prices and the commodity being unable to shake investors’ risk averse mood as of late, Brent’s nearest timespread widened to 44 cents, an indicator of long term bullishness. The number of people in the U.S. getting a first dose of a Covid-19 vaccine has risen to almost half a million a day, a level last seen at the end of May, as the overall vaccination rate in the U.S has increased to 60%.

“The people who are pessimistic about delta will tell you prices will continue to slump into the future,” said Phil Flynn, senior market analyst at Price Futures Group Inc. “While that’s certainly possible, if we continue to see positive data coming out of the White House, and OPEC is able to modify production as needed, it’s very possible we’ll see a rise in the near future.”